Check out the photos from our Back to Ghosts day! 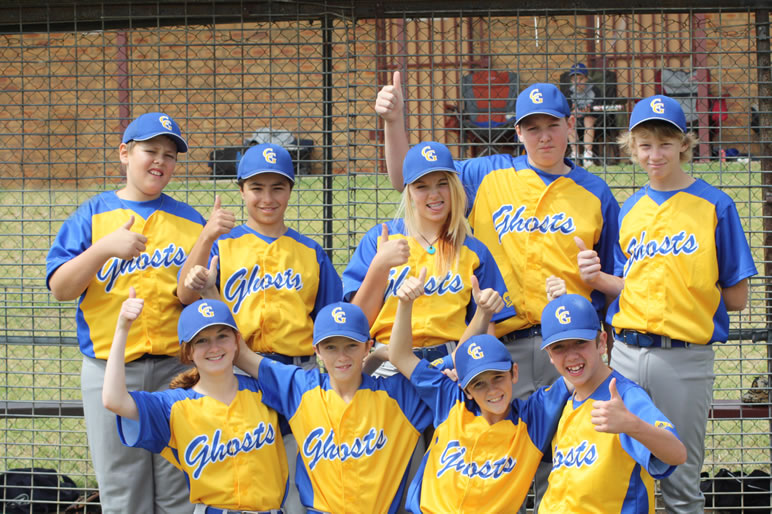 Expressions of interest are being sought for Coach/Assistant Coach positions for the upcoming 2013 - 2014 season.

Email your expression of interest to Ghosts Executive - ghostsbaseballclub@gmail.com

Please include a brief summary of your baseball experience and nominate the age group/s that you are interested in coaching.

Welcome to the new executives for the upcoming season.

THANKS FOR YOUR SUPPORT & ENTHUSIASM

Congratulations to the U/14 Goblins, Jackson MANNIX and Rhys DEWICK for their awards recognition by Macarthur Baseball League for 2012-2013.

Spirit of Sport Team - Over 35 Gumbies

The Macarthur Little League team made history recently when they were RUNNERS UP for the NSW State Title and qualified for the Australian Little League Championships to be held at the Gold Coast in June 2013. Ghosts were well represented by Pitching Coach Nick BOLTON and players Rhys DEWICK, Daniel FRY, Dylan HILLYER and Jackson MANNIX. FANTASTIC RESULT and GOOD LUCK at the Nationals.

The March 2013 Sports Award winners have been announced by West Sports Council. CONGRATULATIONS to U/14 Goblins - Team of the Month and Wayne Fry - Spirit of Sport Award. Both are WELL DESERVED winners.

One of our Ghosts Goblins - Tamika - recently represented NSW in the National U/15 Girls tournament held in Melbourne where NSW were undefeated Champions. Tamika was rewarded with selection in the ALL STARS team as left hand pitcher. CONGRATULATIONS

Our U/14 Ghosts Goblins were recently crowned Macarthur Junior League Champions for 2012-2013 when they won their Grand Final game against Moorebank Royals 15 to 5. WELL DONE to all players and congratulations to the Coaches Wayne Fry and Wayne Daniel.